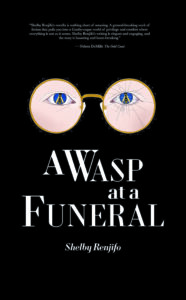 Screenwriter, novelist and Glen Cove native, Shelby Renjifo, is proud to present her freshman release, A Wasp at a Funeral, which asks the question: “What would you say at your loved one’s funeral—or even your own for that matter?”. Four narrators lead four very different chapters—and proposed eulogies—in this fictional novella.
Already accumulating accolades, legendary Long Island based author, Nelson DeMille, recently remarked:
“Shelby Renjifo’s novella is nothing short of amazing. A ground-breaking work of fiction that pulls you into a Gatsby-esque world of privilege and comfort where everything is not as it seems. Shelby Renjifo’s writing is elegant and engaging, and the story is haunting and heart-breaking. We have to see more of Ms. Renjifo.”
After receiving an EVVY nomination for “Outstanding Writing for Prose” for the short story version of the book, she decided to extend her tale further; and while working as a writers production assistant for Danny Strong’s Dopesick, she completed her piece, along with a portfolio of screenplays.
Each chapter unfolds a new narrators’ perception of the main character’s short life based on their own intimate—often skewed—anecdotes at his funeral. Don’t act like you’ve never thought about it before—how would you present on that podium?
Shelby Renjifo is a screenwriter and novelist who grew up in Glen Cove and is a graduate from Emerson College. Renjifo recently released her critically acclaimed novella A Wasp at a Funeral and has a portfolio of screenplays currently in different stages of production. She is also diligently working on her first novel. No matter the writing medium, she hopes to use her voice to unite others through art.
—Submitted by Rick Eberle