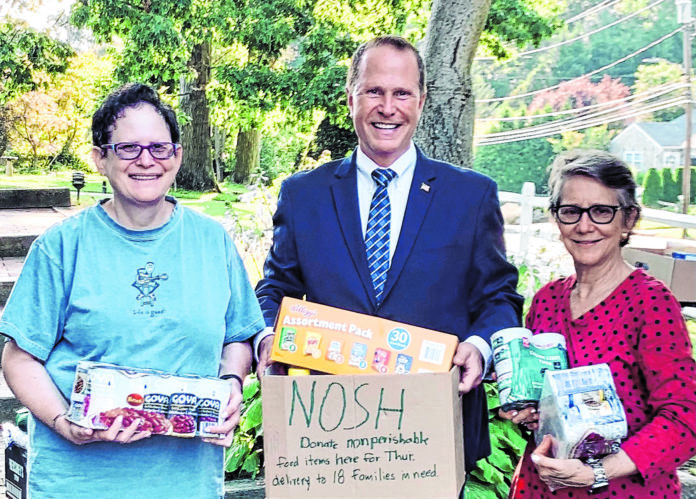 While the fire on Aug. 24 ripped through the VFW Post 347 in Glen Cove, the building is still standing because of the Glen Cove Volunteer Fire Department’s and surrounding fire departments hasty response. One part of the building that experienced the most damage, however, is where NOSH, a program of the North Shore Soup Kitchen, a local nonprofit that provides groceries for those struggling with food insecurity, operates.

“It was two months worth of food for our families and we had about 23 or 24 refrigerators and freezers that are basically unusable,” Christine Rice, the chair of NOSH, said.
But with a community like Glen Cove surrounding NOSH and the VFW Post 347, nothing is impossible, as the community has ensured that those NOSH serves will continue to be fed.
NOSH serves hundreds of families across the North Shore, providing them fresh ingredients to make nutritious meals for their families. NOSH, which had not always been partnered with the North Shore Soup Kitchen, was founded by Courtney Callahan of Locust Valley during the pandemic. She wanted to ensure that no one in the community went hungry in the face of consequences of the pandemic, like job loss. Since the program’s inception, it has operated out of numerous locations such as Glen Cove High School and the Church of St. Rocco. With their new headquarters in the VFW Post 347 unusable for now, NOSH will need to find a new place to operate to continue its mission. Until then, the community has stepped up by donating time, food and money.

“When people had realized that the fire had occurred, we were receiving calls and emails of people asking what they could do,” Rice said. “They were offering financial donations or food that they could drop off. It’s really been overwhelming and we’re very grateful.”
City of Glen Cove Councilman Gaitley Stevenson-Mathews two days after the fire was delivering 18 meals to families. People near and far donated food to make the endeavor possible. Anna Maria Bencivenni Gulino had heard about the fire all the way from Queens,so she decided to drive all the way to Glen Cove to drop off groceries, including fresh avocados. Rabbi Dr. Janet Liss of North Country Reform Temple and Grace Blank also donated groceries after purchasing canned meats and other critical items from BJs.
Stevenson-Mathews, who has been delivering food with VFW member Joe Moores for a year, said it simply: “This is Glen Cove.” And Rice said she had to agree. “While neighbors and friends were helping me in serving those on my list, other drivers, volunteers and organizations across the Glen Cove area were also hard at work, making sure the [over 600] families served by NOSH were receiving information and access to food,” Stevenson-Mathews said. “In a gracious way, some of the other pantries in the area extended their hours, some drivers were able to pick up food at other locations and some who typically received food delivered to their homes were able to travel to other locations.”

While NOSH works to find a new headquarters and get back to the business of helping the community, Rice said the community can support NOSH by making a donation in the form of food or money. NOSH was in attendance at the Glen Cove Downtown Sounds event on Aug. 27 raising awareness and support about their organization and mission and on Sept. 1, Veronica Beard Americana Manhasset held a special event where 20 percent of their proceeds were donated to NOSH to aid in its recovery.

As for the VFW Post 347, veteran Ben Farnan said the post is currently in communication with representatives and local officials to apply for a grant in order to rebuild. The post is also looking for a temporary place to conduct meetings and events for the veterans who see the post and the group of veterans as a home away from home.

“We have to go through the insurance company and the fire marshals and inspectors and any work we do we are going to have permits drawn,” Farnan said. “We don’t know how long we’ll be incapacitated which will directly impact [NOSH] as well.”