Members of Congregation Tifereth Israel, the surrounding community and local officials celebrated 125 years of worship, community and resiliency with hors d’oeuvres, cocktails and jazz music on June 12. Amid the light chatter and networking, attendees would hear from Rabbi Irwin Huberman and Cantor Gustavo Gitlin, and then honor the five-generation Shapiro family for their contributions to Congregation Tifereth Israel. Then, they’d watch a documentary that chronicled the history of the house of worship and featured interviews with individuals from multi-generational families.

“In 1897, some Jews found a home,” Rabbi Huberman said, referencing an anthem written for Congregation Tifereth Israel that was previewed for the first time that evening. “Little did they know that 125 years later we would be standing here today celebrating a century and a quarter in the light of Congregation Tifereth Israel. A few Jewish business persons who made up the heart of the financial community, along with other European immigrants, moved to what is known at the time as the Gold Coast, still is, established in 1834 as a steamboat stop, Glen Coe.”

Rabbi Huberman explained that it is likely someone misheard “Glen Coe” as “Glen Cove,” giving the city its current name. The community continued to grow, along with the community that would become Congregation Tifereth Israel.

Congregation Tifereth Israel has remained resilient through various challenges throughout the year, including COVID-19. In 2020, the synagogue installed equipment, such as new cameras, to broadcast services live. Doing this ultimately increased on-line attendance, with some viewers watching from Canada or Argentina, where Cantor Gitlin is from.

“When you think about the changes in the world, and even the changes in Judaism, it’s an amazing thing that Congregation Tifereth Israel continues to not only survive, but to thrive,” Rabbi Huberman said. “We began with a very small community in 1897 and now we’re approaching 350 members… at a time when organized religion is not gaining strength around the United States.”

What seems to keep people here is a strong sense of community and dedication. That is why on the 125th anniversary, the Shapiro family, a multi-generational Congregation Tifereth Israel family, was honored. State Senator Anna Kaplan, on behalf of State Senator James Gaughran, State Assemblyman Charles Lavine, Nassau County Legislator Delia DeRiggi-Whitton and Glen Cove Mayor Pam Panzenbeck presented citations to the family. Congressman Tom Suozzi and Nassau County Executive Bruce Blakeman, who were not in attendance, also sent citations.

“One hundred and twenty five years, it’s amazing that anything can survive that long,” DeRiggi-Whitton said. “Really, not only is it the congregation that survived that long, but think of how you’ve always been there for each other for 125 years. Think of the relationships. Think of how many times someone was helped through really tough times, supported emotionally. We’re so lucky in Glen Cove to have these foundations. I’m hoping going forward we continue to always have them.”

Present members of the Shapiro family included Libby, Lenny and Caryl, Ben, Michelle and Eve, who attended via FaceTime because she was on a business trip in France. The memory of the late Joe Shapiro, the husband of Libby, was honored and also recognized was the contributions of the Shorenstein, Shapiro and Posner families who settled here in the 1900s and helped build the community. They served as officers, advisers and benefactors, inspiring others with their loyalty and dedication.

“The Shapiros have been at the heart of this congregation for 114 years,” Rabbi Huberman said. “They have led in business. They have served as presidents and committee heads. They have blessed where blessings were due. And they have raised their hands when changes needed to be made. The Shapiro family through thick and thin has helped to sustain this congregation. I only go back three generations with you, but I remember Joe Shapiro, a blessed memory, who I be-lovingly referred to as the ‘God Father.’”

Rabbi Huberman remembered coming to shul one morning without a jacket and Joe Shapiro lending him his sports jacket.

“It is said that in life that we correct those we love the most,” Rabbi Huberman said. “And if that be so, Joe Shapiro must have loved us all a lot.”

Since that time, Rabbi Huberman says he keeps a sport jacket in the side booth.

Lenny Shapiro said he found out two months ago that the family was being honored.

“Our affiliation with CTI goes back to my great-grandparents,” Lenny Shapiro said, adding how himself and the generations before him served in various leadership roles in the synagogue. “CTI has always been in our hearts and in our souls. With 125 years, there will be challenging and rewarding times.” 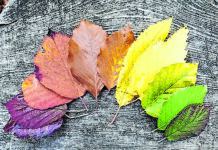 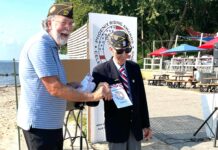 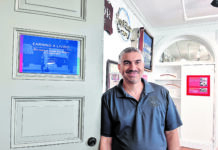