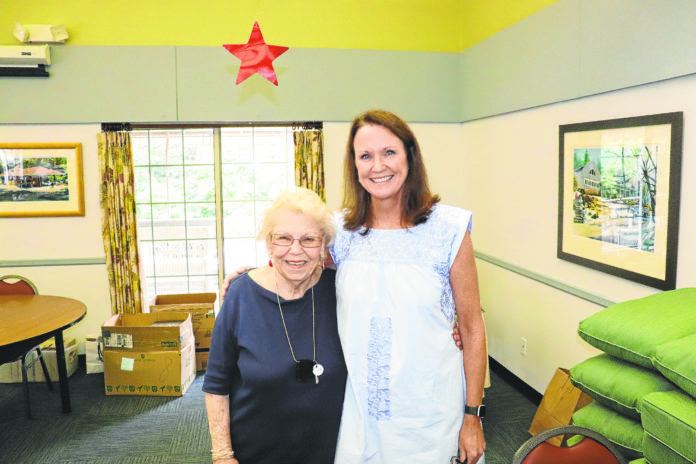 Pandemic will not stop staff from caring for seniors

The Glen Cove Senior Center serves as a respite during the weekdays for many seniors local to the city and even throughout the county.

Through the center, the seniors are able to participate in activities that exercise their bodies or brains, make tight knit friendships and share a meal with a side of some conversations, telling stories of yesterday and today.

The staff, however, remained busy as they connected with the seniors either on the phone or virtually. Activities continued over Facebook and Zoom and staff coordinated meal deliveries. “But there is nothing compared to opening the door and being able to have conversations with them,” Rice said.

It was not until April that the Glen Cove Senior Center was able to open its doors once again to the seniors who enjoy its programs and the ability to connect to their peers.

“It was wonderful to see them coming in,” Rice said. “We all had masks on, so we couldn’t see the smiles. But through their eyes you could see they were smiling. It was just so wonderful to see them back in the building. Every person who works here at the center has a heart for this mission and helping seniors.”

And this popular program is not just limited to the residents of Glen Cove.

“Anybody in Nassau County can become a member,” Rice said. “It’s a free membership. We do have a catchment area as to where our buses can go to pick people up; so that is Glen Head, Glen Cove, Glenwood Landing and Sea Cliff. Our buses can pick up everyday, but anybody outside those areas are more than welcome to come and join us.”

During the pandemic, Rice said, 90 applications were submitted to the Glen Cove Senior Center. The Adult Day Program has also grown in popularity, as it serves community members with dementia through discussion groups and activities like arts and crafts.

The Glen Cove Senior Center closed its doors March 12, 2020 in compliance with an order from the Nassau County Department of Human Services that all senior social activities and programs had to cease.

But the center did not stop serving the seniors it is devoted to, as it put together a daily schedule of programs that were available on www.glencoveseniorcenter.com and the Glen Cove Senior Center Facebook page. The activities ranged from concerts to art and fitness classes. As daily meals were an important component to the members, the Glen Cove Senior Center also began delivering meals to residents of Glen Cove, Sea Cliff, Glen Head and Glenwood Landing residents that are over the age of 60.

But nothing compares to coming to the center Mondays through Fridays.

Madeline Amato, who is in charge of a program called The Fling where items donated to the center are sold for about a dollar, said she comes to the center everyday, all day, except for Friday. Amato joined the center five years ago after moving from Dix Hills to Glen Cove.

“It’s the best thing that happened to me and everybody that’s around because where could we go for all this entertainment?” Amato said. “I would have nothing to do, really.”

Amato said she’s met three of her best friends through the center, and she even sees them on the weekend. “I always tell my kids that they are the best friends I’ve ever had, and I’ve had many friends,” Amato said. “But these girls are the greatest.”

After getting through a pandemic, Amato said she is just happy to be back.

“Christine [Rice] is great and the whole staff is great,” Amato said. “You couldn’t ask for anything better here. I mean, where are you going to go to eat? It’s the best, really.”

To learn more about the Glen Cove Senior Center and how to become a member, visit www.glencoveseniorcenter.com or call 516-759-9610.