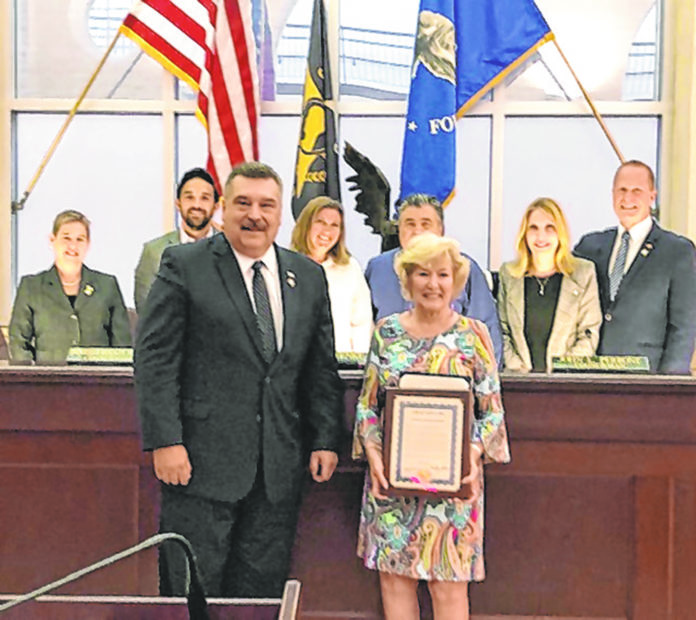 Victoria Crosby can often be found at Glen Cove’s events, reading thoughtful poems that she writes about 9/11, Martin Luther King or even Glen Cove’s history. She is, after all, Glen Cove’s Poet Laureate. Her role as such was honored with two citations at the Glen Cove City Council meeting on July 27, as she prepares to say goodbye to the city.

Crosby was named Glen Cove’s Poet Laureate in 1994 by former city mayor and current Congressman Tom Suozzi in 1994. In addition the city commissioning Crosby to write and read poems at city commemorations and events, Crosby held poetry reads in several venues across the city pre-COVID.

“[The poet laureate] title has enabled her to thoroughly and thoughtfully chronicle special events and momentous occasions with her keen observations and beautiful sentiments,” City of Glen Cove Mayor Tim Tenke said as he read aloud the citation being presented to Crosby. “Victoria’s dedication and love for Glen Cove and the arts are expressed through her involvement in the community over the past 30 years.”

At age 19, Victoria Crosby moved from her native England to the United States. Crosby lived in Roslyn for a short time before moving to Glen Cove in 1984. She was torn between purchasing a home in Cold Spring Harbor, and one in Glen Cove. She chose the latter.
Crosby would find the Glen Cove Arts Council in 2006, where she went on to serve as the North Shore Historical Museum president. She is also a founding member of the North Shore Sheltering Program, among other leadership roles in the city.

“You have been so involved in our community and you have really helped to make this a better, better place,” said State Assemblyman Charles Lavine during the ceremony, where he too presented Crosby with a citation. “The mayor described a lot of your involvement, but other things you are involved with include teaching at Portledge, teaching at St. John’s, teaching young people the arts, piano and violin. Especially your work to promote interracial justice and interfaith peace, love and understanding is something that we all value and always will value.”

Crosby is a treasure, Lavine added.

City Councilwoman Eve Lupenko Ferrante then read Crosby a poem that she wrote for her titled “My Ode To Victoria Crosby,” where she chronicled Crosby’s multiple undertakings in Glen Cove, wishing her well in her next home in Georgia.

“I am overwhelmed,” Crosby said after receiving her citations and hearing the poems written about her from Lupenko Ferrante and Lavine. “We lived in Glen Cove for more than 30 years and it’s the longest I’ve lived anywhere in my whole life and I feel like I belong here. I am very sad to be going, but I am certainly going to give the suburbs of Atlanta a run for their money.”