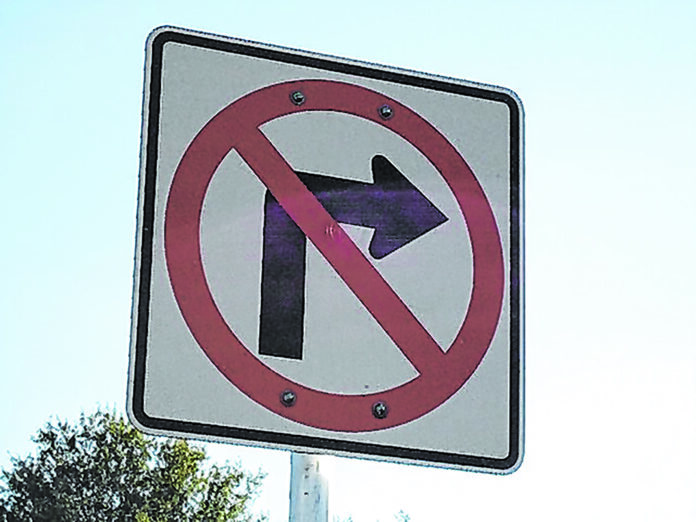 Greenvale residents took the public comment portion of Sept. 13’s Town of Oyster Bay Town Board meeting to discuss new “No Right Turn” traffic signs in Greenvale that prohibit a right turn for three hours in the morning and three hours in the afternoon.
The series of comments began with Greenvale resident Barbara Demartini, who stated that there is a traffic problem in Greenvale.
And while all the speakers seemed to agree, how to come to a solution was the dispute. While some argued that new “No Right Turn” traffic signs at the intersections of Helen Street and Marion Street and Ceder Street and Marion Street would keep children safe when getting on and off the bus, others argued that the sign would cause more traffic down other streets.
“Families with children live on these streets,” Demartini said. “Families with children are not exclusive to Marion, Helen and Cedar Streets. Living in a safe neighborhood is a concern for everybody living in Greenvale. Over 100 residents of Greenvale who live on Addison Lane, Osborne Lane, Wildwood Lane, Carmen Road, Hewlett Road, Pineridge Road, Roscoe Court and Heritage Court are also concerned with our safety.”
And while Demartini believes the voices advocating for traffic safety on Marion, Helen and Cedar Streets have been heard, as it was discussed at a July town board meeting, other concerns have been overlooked.
Audra Roth, who lives on Helen Street, was at that meeting in July. She came back to the Sept. 13 town board meeting to thank the town for installing the signs that she believes will help keep the children safe when getting on and off the bus on her corner.
“I understand that people aren’t happy,” Roth said. “I will tell you there’s no solution to this problem, but taking down the signs definitely is not a solution… The crux of this problem is Glen Cove Road and Northern Boulevard. I’ve lived here for 22 years. We’ve been banging our heads against the wall for 22 years asking, begging, pleading, can you do something?”
But Greenvale residents have had their requests to the state and county declined. “So what is there to do?” Roth said.
However Demartini claims that no residents outside of Marion, Helen and Cedar Streets were alerted to the installation of the “No Right Turn” traffic signs on Marion Street.
“It’s completely unrealistic to think drivers averted from Marion would not use Addison Lane as their next best alternative,” Demartini said. “These cut-through drivers have been described in the minutes of the July 12 minutes [of the town board meeting] as speeding, swerving, with a selfish disregard for kids or walkers.”
Overall, Demartini said, it is “unconscionable” to push a traffic problem from one street to another.
“We have submitted a petition to the town with over 100 signatures from the resident voters of the Town of Oyster Bay living on Addison Lane, Osborne Lane, Wildwood Lane, Carmen Road, Hewlett Road, Pineridge Road, Roscoe Court and Heritage Court [asking to] permanently remove the recently installed ‘No Right Turn’ signs,” DeMartini said.
John Fabio, president of the Greenvale Civic Association, disagreed that the “No Right Turn” signs would cause traffic problems on other streets.
“For years, residents of Cedar, Marion and Helen Streets have been plagued with traffic cutting through their streets endangering longtime residents and newly settled families with young children,” Fabio said, referencing traffic studies done on the area. “Enforcement is the key issue here. Obviously, when we were here in July, this board heard information received from your Traffic Safety Department confirming the need for some corrective action, and at which point you implemented the ‘No Right Turn’ restriction signs.”
Fabio pointed out that the signs only impact the community for 30 hours a week, and that opponents of the traffic signs do not have proof that cars are using the alternative streets.