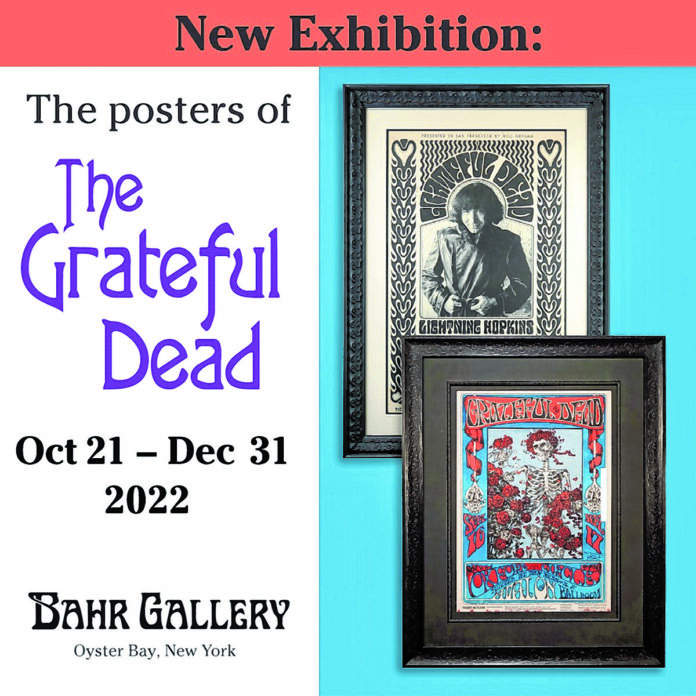 The Bahr Gallery, an art gallery dedicated to rare, first-edition, psychedelic rock poster art, will feature vintage Grateful Dead posters in an exhibition opening Oct. 21, and running through Dec. 31. There will be a reception on Oct. 21 and 22 from 6 to 8 p.m.
Bahr Gallery is located at 95 Audrey Ave., Oyster Bay. The Bahr Gallery is open Friday through Sunday from 1 to 5 p.m. and by appointment. Admission to the Exhibition is free.
The Grateful Dead were in the epicenter of the psychedelic poster revolution. With their exotic sounding name, their heritage as part of the early “Acid Tests” in San Francisco and their improvisational music often featuring extended jams, the Grateful Dead were creative gold for the San Francisco poster artists.
While each of San Francisco’s “Big Five” poster artists; Wes Wilson, Stanley Mouse, Victor Moscoso, Rick Griffin, and Alton Kelley made posters advertising Grateful Dead concerts, Griffin and Mouse and Kelley were most closely associated with the band’s visual expression.
Highlights of the Exhibition include the famous 1966 “Skeleton & Roses” poster by Mouse and Kelley that became a core part of the Dead’s iconography, as well as a first edition “Aoxomoxoa,” by Rick Griffin, an oversized 1969 poster later used for the band’s third album cover, a rare 1969 Ice Palace Las Vegas poster and the iconic 1968 poster known as the “Santana Lion,” a Grateful Dead poster that Santana asked artist Lee Conklin to repurpose for the cover of their first album. More than 35 works in total comprise the exhibition.
Virtually all pieces are first editions, and are accompanied with meticulous background and history, placing each piece in context. Much of this art currently hangs in the Smithsonian, Metropolitan Museum of Art, MOMA, the Louvre, and other leading museums and institutions around the world.
“We are curating the visual experience for admirers of this art, the music, and its special time in history,” said gallery owner and curator Ted Bahr. “While the Grateful Dead was not nearly as widely popular in the sixties as they would become, their active participation in the San Francisco rock concert scene left a large visual legacy of posters advertising their appearances – many of which are rarely seen.”
The Bahr Gallery, which opened in April 2018, has several rooms totaling 1,200 square feet and features nearly 60 psychedelic master works on rotation. Past Exhibitions include “Woodstock and Other Festivals,” and “The British Invasion.”
The Bahr Gallery is open Friday through Sunday from 1 to 5 p.m. and by appointment.
—Submitted by the Bahr Gallery